Home  > NEWS  >  What is the best direction of solar panels?

What is the best direction of solar panels? 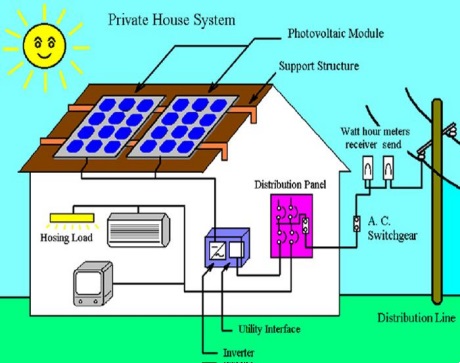 The placement and orientation of solar panels is just as important as which type of solar panel is used in a given situation. A solar panel will harness the most power when the Sun's rays hit its surface perpendicularly. Ensuring that solar panels face the correct direction and have an appropriate tilt will help ensure that they produce maximum energy as they are exposed to the highest intensity of sunlight for the greatest period of time. Some solar arrays follow the Sun using solar tracking systems which significantly increase energy production. The following sections refer only to 'fixed' or non-tracking systems.What is the best direction for my solar panels?

The traditional advice is to position solar panels to be south-facing. This is because, for those of us living in the Northern Hemisphere, the sun is always along the southern part of the sky as we complete our yearly orbit around it. This being the case, the general best practice to date has always been to position solar panels facing south in order to capture the maximum amount of sunlight overall.

Generally, it’s common knowledge in the solar industry that these south-facing panels should be tilted between a 30- and 40-degree angle. This angle varies and is just about equal to the latitude of your home (how far north you are in relation to the equator).

The reasoning behind this angle specificity is to ensure sunlight hits panels at a perpendicular angle, which produces the most energy. An angle along these lines also helps snow to slide off of solar panels more easily during winter in the northern latitudes.

Some rooftops slope just about perfectly in a way that lets installers secure the panels flush against them and still be at a great angle for capturing the sun’s energy. Other rooftops might be steeper, or some others are flat. Depending on the type of roof you have, there are different mounting systems to help position your solar modules so that they can produce at their best.

South-facing panels work well when you have a standard tier-based rate structure with your utility company. This rate system charges you based on how much energy you use on average. If you’re a big-time energy user, you’re charged a higher rate than those who use less energy overall.

If you have a time-of-use (TOU) rate structure, then west-facing panels might make more sense. This is because time-of-use rates mean you will be charged more for electricity during peak use times, rather on usage volume.

Peak use times are when most people will need and use power. For most places, this is highest in the late afternoon or early evening. This is because it’s generally when we return from school or work and run the AC, cook dinner, do homework, watch TV, and any other activities that might require electricity for light and other power needs.

During this time, the sun will be heading toward the western horizon to set. If your solar panels face west, you’re able to capture the sunlight during the most critical time for the best energy production.

The advantage here is that you can use the power that your panels are producing live. When you do this, you avoid the need to pull extra energy from the grid, which means you won’t be charged the higher utility rates.

The difference can be a big one when you consider that it’s possible to generate 49 percent more power during peak electricity needs in time-of-use areas with west-facing panels.

Of course, another way to work around time-of-use rates is by installing a solar backup battery. With a battery, you can store energy during the hours when sunlight is hitting your solar panels the most, whether they’re facing south or west. Then you can use that stored energy when you want to avoid high utility rates.

The angle or tilt of a solar panel is also an important consideration. The angle that a solar panel should be set at to produce the most energy in a given year is determined by the geographical latitude. A general rule for optimal annual energy production is to set the solar panel tilt angle equal to the geographical latitude. For example, if the location of the solar array is at 50o latitude, the optimal tilt angle is also 50o. Essentially, the closer a solar panel is located to the equator the more the panel should be pointing straight up. The closer the panel is to the poles, the more they should tilt towards the equator.

The angle of solar panels can also influence the power output due to climatic and environmental factors. In northern climates, snow accumulation on low-tilt panels can reduce or completely block the Sun's rays from reaching the solar panel during the winter months. Although this effect will vary for every location, one study in Edmonton, Alberta, Canada concluded that the annual energy loss due to snow accumulation ranges from 1.6% at optimal tilt (53o) to 5.3% at low tilt (15o). Additionally, low-tilt solar panels are more susceptible to "soiling" by dirt and debris which can also partially block the Sun's rays.